As a fire pilot, we have a mandated schedule of “12 days on, 2 days off”…and there’s no choice about when those days will be….the lucky ones get a part of a weekend, most of us get a random couple of weekdays.  Recently, I found myself on a day off, driving along the interstate, and saw a sign…”scenic route”.

I’ve never been a big fan of “scenic routes”….sometimes some great scenery, but often stuck behind a vehicle that has a peculiar talent for speeding up in passing areas, and slowing down in the “no-passing zone”.  But, this day, when I had hours to spend prior to arriving back at my motel for the night, I chose to drive the scenic route…..

The scenery slowly rose into the high desert.  The Whetstone mountains rose to my left, and I could see to the west in the distance the area where we had fought fire the prior week.  Elkhorn village, and the sharply rising terrain to the south of Elkhorn.  (when I first heard of Elkhorn I thought it was simply a statement “of the West”…until I found out that Elk in that area were more plentiful than deer).

The drive was pleasant, and a historical marker loomed.  “Empire Ranch Headquarters Historical Site”.  Seemed like a good plan, so I turned down the dirt road, not knowing what to expect.  Shortly I came upon a map, mounted under one of the ubiquitous small shelters.  Pulling over, I kept an eye out for rattlesnakes, knowing it was cooler in the shade.  Perusing the horizon, which was indeed beautiful, I saw no sign of human life.  Looking at the map, I took note of the nearby international border, and knowing some of the incidents recently reported, it seemed like a reasonably good idea to remove my 9mm, chamber a round, and put it in my pocket.

The Empire Ranch headquarters was several miles down the dirt road.  Pulling into the parking lot, there were a few government vehicles, but no sign of humans. The scene, other than the vehicles, appeared to be right out of a  John Wayne movie.  Wandering up to the first of the buildings, I saw a sign…”come on in, just be sure you close the door when you leave”.  I started with the original building, built in the 1860s, and moved progressively through the rambling ranch house.  The artifacts were not under lock and key, but rather looked as though someone arose this morning, washed the dishes, and went out to work.

The hats, the chaps, the bedrolls, all appeared usable.  The kitchen utensils included bowls that could have come straight from my mother’s kitchen, especially the large yellow mixing bowl.  The additions chronicled the years…notations were in each area describing the history of the families that had originally began with a small ranch, then grew to over a million acres.  Pictures of horses, families, women and children which had a familiarity with the pictures of my family from New Mexico adorned the walls.

Even though the day was warm, the house was quite tolerable with no air-conditioning, and no windows open.  The porch was positioned under a large tree, and it felt like my grandparents would walk out any moment, put a watermelon on the table, slice it and we would eat.  As I wandered through the various rooms, and saw the meat locker (designed to keep meet cool with evaporating water dripped down burlap covers over small grid screen wire), the corrals, the barns….I felt time slip.  I had yet to see another soul.

Touring the buildings took some time, and I could imagine things changing from horse and buggy to the early automobiles, to trucks…until the ranch closed in 1976.   The corrals had squeeze chutes that could have been the ones from my grandfathers place from my childhood.  Signs mentioned that several John Wayne movies were made here…no wonder it felt somewhat familiar!

Walking by the cottonwoods along the creek (which contained running water, even in the dry season), I eventually encountered two elderly gentlemen who were out walking.  Had it not been for their modern Dodge pickup, I would have considered them to have been ghosts of the past who had reappeared.    In the common southwestern fashion, we nodded to each other, but no words were exchanged.

Perusing the map, I saw a number of roads that extended back into the wilderness conservancy.  I followed one, went deeper and deeper back into the area.  Every few miles I would get out of the rental car, and walk along paths…originally cattle trails, then as I went further into the higher country it became apparent that these were game trails.  Solitude was my friend.

After several hours, I came across a ranch hand who had stopped to use his cell phone.  (I had already noted that the cellular service was spotty, so it was no surprise).  We chatted a few minutes, and he gave me some pointers on areas to go that would be perhaps a bit difficult to drive through, but would give beautiful views.  The well graded dirt road had given way to “two-track”, but was still quite passable.  I went through the prescribed number of gates, making sure to leave the open ones open, and closing back the ones that had been closed on my arrival.

Road signs were absent.  Approximately every few miles, or at a fork, a small vertical brown sign would have “6300”, or “6309” on it, and the road remained true to the map.  A few times I considered whether or not it might be a wise idea to turn around, retrace my path, and exit at a known place.  The map beckoned with a route that would lead to an intersection with a known road to return to Fort Huachuca.  Having never had a real attraction to the word “retreat”, I kept going.

Memories of my youth, out hunting with my father, as we would navigate across brush, trails, washed out roads and rocks hung with me.  I could hear him say “stay out of the ruts, stay on top of the high spots” as I pushed that poor rental car to do what really called for a Jeep.  Bouncing around the rocks, I would pick a path that would allow me to keep the wheels high enough so that the car wouldn’t “high center”.  Washed out areas kept getting deeper.  I crossed dry creek beds over and over again, as the road worked back and forth.  The reward was the view…. 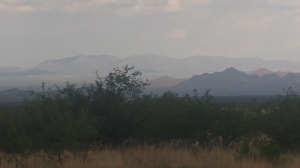 Arriving in the high meadow, it was cool..the view was spectacular.  I had crossed a couple of places that using momentum and luck I had managed to keep the car moving forward.  I was not anxious to retrace those steps…besides, I had made it this far, hadn’t I?

The nagging thought that “AAA isn’t likely to come here to get me out”, and “hmmm, no cell service” persisted.  The small brown road markers had ceased to appear.  I still had the map, and the topographical features were appropriate.  A quick assessment of the contents of the trunk showed that I had no food, had used the one bottle of water I had, and nothing else of use.

Proceeding forward, I came to an area where  at one point there had been a windmill, the windmill now warped and twisted (storm?); and a small pump powered by a solar panel was putting a trickle of water into a trough for cattle.  Looking around, I could tell no vehicle had been here in quite some time.  The rains hadn’t yet started, and yet the crust on the ground showed that there had been no disruption by man since moisture last fell.

Hours had passed since I left the black top.  Decision time…continue?  Return?  The lure of the road not yet seen called, so onward I pressed.  Several more dry creek beds, including one that was so sandy I knew that if I ever slowed, I would be “stuck”.  One that as I climbed the opposite bank, the tires began to spin….backing up, getting a good “run” at it, I managed to carry the momentum forward enough that the tires got a grip and carried me to the top.

Memories of riding in a pickup with someone driving who wouldn’t keep up the momentum made me laugh.  We had been hunting when we lived in San Angelo, and were out with a distant “relative of a relative”.  A sudden shower had come up, and the tracks were slick.  The owner of the truck would slow at the worst times, and we had to all get out and push.  Dad finally convinced him to allow dad to drive, and we bounced, and slid, but kept moving forward until we made it out of the pasture….as with lots of things, solitary memories gave me small bits of information and inspiration to get through.

After a bit more time, I came upon a gate that opened into a better road…and sure enough there was a small brown sign with the appropriate number on it…but I had gone *way* deeper into the conservancy than I had planned…but the sight was beautiful. 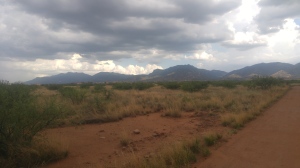 A dozen more miles along this better road, then onto one even more improved, and ultimately I began passing corrals.  Signs warning of illegal border crossings were evident.  As I came up to the black-top, there were two Border Patrol vehicles at the gate.  Waves were exchanged, and I returned to the modern day.

Some of the best adventures occur when we choose a road that we did not plan.

Having survived the medical world for a few decades, I'm pursuing flight, firefighting, wrench turning, and enjoying my family. I have a passion for "warbirds" specifically the P51 and T-6, the Corsair, and do airshows in those planes. I fly "The Mighty 802" fighting wildfires, and have a great time in my SX and Husky. Oh, yeah, I occasionally show up at the hospital and pass gas.

I'm glad you stopped by. You are welcome to read, comment, discuss, etc. However, no mean, disrespectful comments or hatefulness please. I reserve the right to make such remarks, myself however (after all, it is *my* blog...)